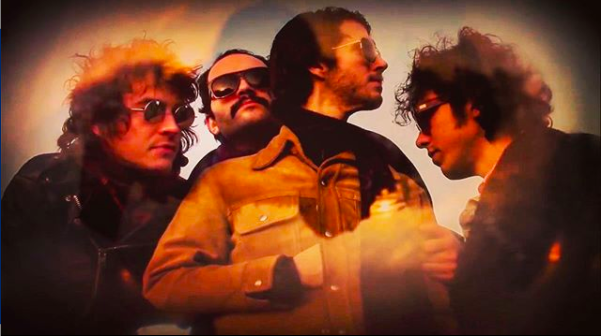 “Technicolour psych-rock that feels both you’ve discovered a hidden gem from decades past and vibrantly, thrillingly fresh.”
– NME

Today, The Muckers release “Roll The Dice“, the first single from their debut album slated to come out September 4th via Greenway Records. After a single release show at Brooklyn’s freshly inaugurated TV Eye on March 6th, they are heading down to Austin to perform at SXSW in showcases for Levitation, Desert Daze, and Burgermania.

New York City’s layers of continuous noises – vibrating, staggering, flashing, reverberating, buzzing & blazing – have set the backdrop to a rising four-piece that NME already calls “one of New York’s most exciting new bands.” Just like the city, The Muckers are equal parts vital and timeless, resolute and vibrant, monumental and dangerous.

As The New York Times tells the story, lead guitarist and vocalist “Emir Mohseni, was inspired by the Strokes to pursue a career in music — a passion that brought him to New York all the way from his native Iran.” The move, profiled across acclaimed publications, from Rolling Stone to Billboard, only marked the beginning of the band’s story. Upon landing in this new environment, Mohseni met the three guys that would become his closest friends, and build with him the vitalizing sound and enrapturing live show that The Muckers are garnering early praises for: Anthony Azarmgin at the bass, Chris Cawley on rythm guitar, and John Zimmerman behind the drums.

Not unlike the City, their live shows are fast and enthralling. They found an early supporter in KEXP’s Cheryl Waters who praised the band on her show,  noting that they “were captivating the crowds” during their set at Treefort Festival in 2019, and a fan in World Cafe contributing host Stephen Kallao, who invited them to perform in the studios. Peers also recognize their talents, and bands of the likes of Pond, Shannon and The Clams and Delicate Steve have all invited The Muckers for tour support.

It’s fitting that “Roll The Dice”, the first single off their upcoming debut album is a song about forgetting the past and taking big risks, as The Muckers move on from the novelty of a musician that has taken considerable risks to be free to perform his music to becoming a fully fledge band whose legion of fans grows bigger after each performance.

Listen to “Roll The Dice” on all platforms, and watch the music video below.

“It’s a call to fans to kick the dust off of their souls and boogie.”
Rolling Stone

“Word is most definitely out about The Muckers”
DIY

“Rock and roll is a dish best served live. It relies on the body heat and energy exchange between the band onstage and a sweaty audience to create a magic you can only experience, and lose yourself in, when you’re watching it unfold in person. Emir Mohsseni knows that cardinal rule.”
Billboard